So, for those of you who did not know already, Devyn chose Football.
He is playing tackle football and loves every minute of it...the kid even digs the conditioning training.
Make him work hard for recognition and he is all for it.
Me:  Devyn, what do yo like best about Football?
D:  I don't know, it's just cool.
Me:  What's your favorite position?
D:  When I am on the Kick Off Team because it is fun tackling the opponent who catches the kick.
Me:  What is the least favorite thing about Football?
D:  Nothing...um, losing.
Me:  Do you like Football better than the other team sports you've played, such as baseball and soccer?
D:  Yes...and my dad [Wayne] wants me to go back to baseball because he likes that better.
Me:  What do you like better?
D:  What do you mean, what do I like better?  I already said I like Football.
Me:  So do you think that you will stay in Football or will try something new next year?
D:  Football.
Me:  What about Lacrosse?
D:  You said it costs too much.
Me Laughing:  Yeah, I did.
So far he has played on the following positions:
Tight End
Receiver
Corner Back
and the following teams:
Kick Off Team
Kick Off Return Team
Any sponsors out there.........................?
This kid is a natural at ANY sport.

Go Kung Fu Pandas!
(UPDATES:  slideshows below are no longer avail. ~ apparently you have to PaY for cool things like that to last longer :p
Also, this year, Devyn is looking into Parkour/PopWarner/Lacrosse ~ we will keep you posted & update you periodically ~ hopefully with some pics & video clips) 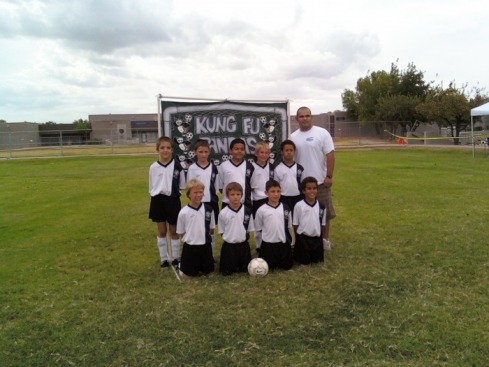 They had a fantastic coach (Jason Burgess) and would not have had the success they had without him as well as the team's camaraderie and willingness to work & play hard!  And that they did...and so it was that they won every game!

Another thing I discovered first hand, by being the 'Team Mom' this year, is that the players' success was inevitable because of the love & support that each player received from their parents & family.  I will always have a place in my heart for ALL of the pandas & their families.  We couldn't have done it without you!

As parents to such GREAT sons, I'm sure we all look forward to next years soccer season with bitter/sweet thoughts and to what it may have in store for us as we part our ways and say our temporary "good-byes".  For next year we may be competeing against one another ...Until then, Go Kung Fu Pandas!

I made some changes to the slide show we originally had posted here.

I got the idea of a new photo show from Karin (thanks Karin).  She used a free photoshow site called Roxio...pretty cool stuff!  Be sure to ck out her slide show too...it follows below.

Slide Show below provided by Karin Clapper (Soccer Mom to Myles & AJ)
Thanks Karin!
Remember to first to turn off/pause (=) the music on the Playlist above first.